I’m sure you’ve heard that at least once, especially if you frequent forums that offer vendor sponsorship. 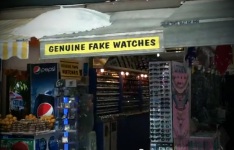 Many of these forums provide protection to their sponsors. For those who pay, contrary remarks are removed immediately, and the thread can go on one sided until everyone gets bored and moves on to something else.

There is little consideration of fact, just dollars, and the guy who pays gets his way every time.

This position limits our ability to respond to bogus claims directly. This article is our response to the recent flood of “The Same as Injector Dynamics but Cheaper” claims found on these forums.

It’s All About the Data?

Regardless of skill level, most tuners, professional and otherwise, strive to turn out good work. In my experience, almost all tuners take pride in offering the best calibration possible.

A few short years ago, these tuners had to jump through hoops to make the best of a bad situation when tuning injectors with unknown characteristics. Most learned to do a good job with limited or no data, but times have changed, and those in the know choose to work with a known quantity.

Between the GM injector models that Calibrated Success offers for Ford Racing injectors, and the plug and play data offered by Injector Dynamics for Ford, GM, and Chrysler applications, tuners are no longer forced to guess.

As a result, they can turn out a better calibration in less time which benefits everyone from the tuner, to the guy that drives the car to work every day.

This data has become a major selling point for Injector Dynamics as an increasing number of tuners experience the benefit of working with accurate data.

The latest batch of “Same As” claims focus on the ability to generate the same complex data that Injector Dynamics is known for.

Surprisingly, these claims spread from the safety of the vendor sponsored forums, to the HP Tuners forum where there is no protection. Everyone can say what they want as long as they remain semi-civil.

As far as I can tell, the rules are – no eye gouging – no strikes to the groin – and no biting. Everything else goes, as long as it contains technical content.

It started with ID dealer Dave Steck of DSX Tuning announcing a price increase. Before long someone jumped into his thread and linked to an LS1 forum thread titled ” Injector Comparison – BOSCH – FIC version – ID version “.

Dave unleashed with his usual fury…

“You do know FIC has been handing out ID’s data as their own, and telling people that ID stole the data from FIC, right? Ask FIC about the cease and desist letter.”

“It’s about ethics. Shady business needs to be called out in it. Hell, just look at the proof I posted in the other thread about files handed out that we’re originated by Paul Yaw.”

referring to these screen shots of a plagiarized data sheet 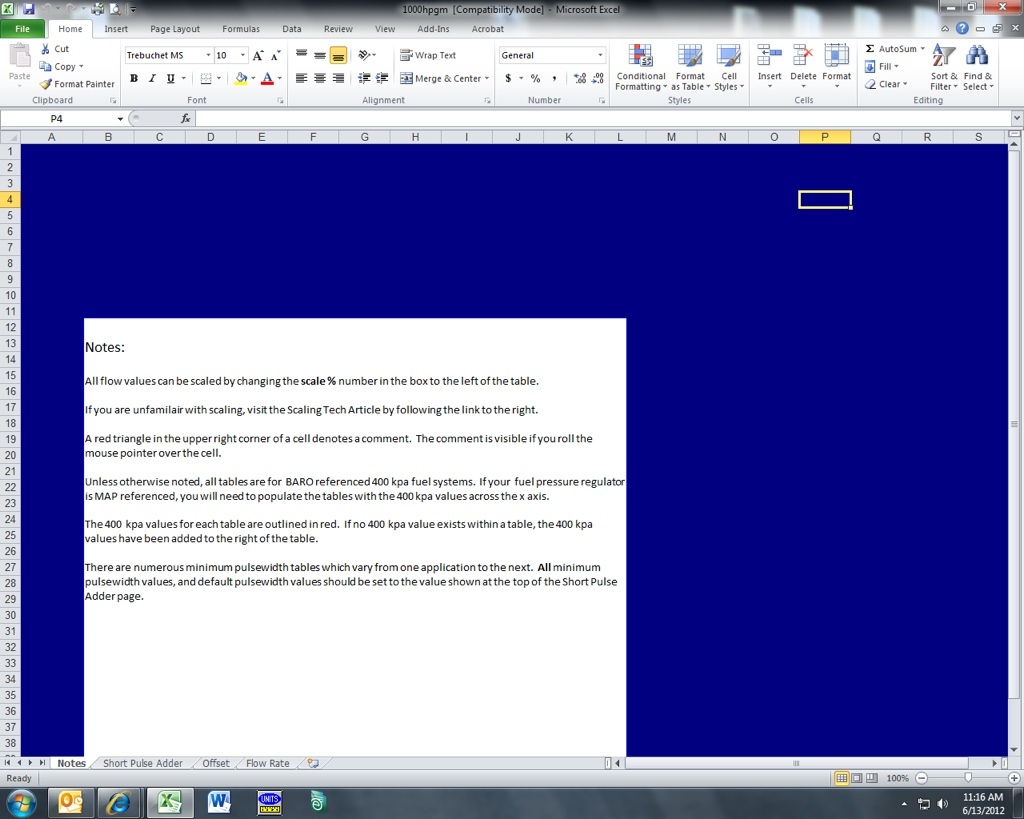 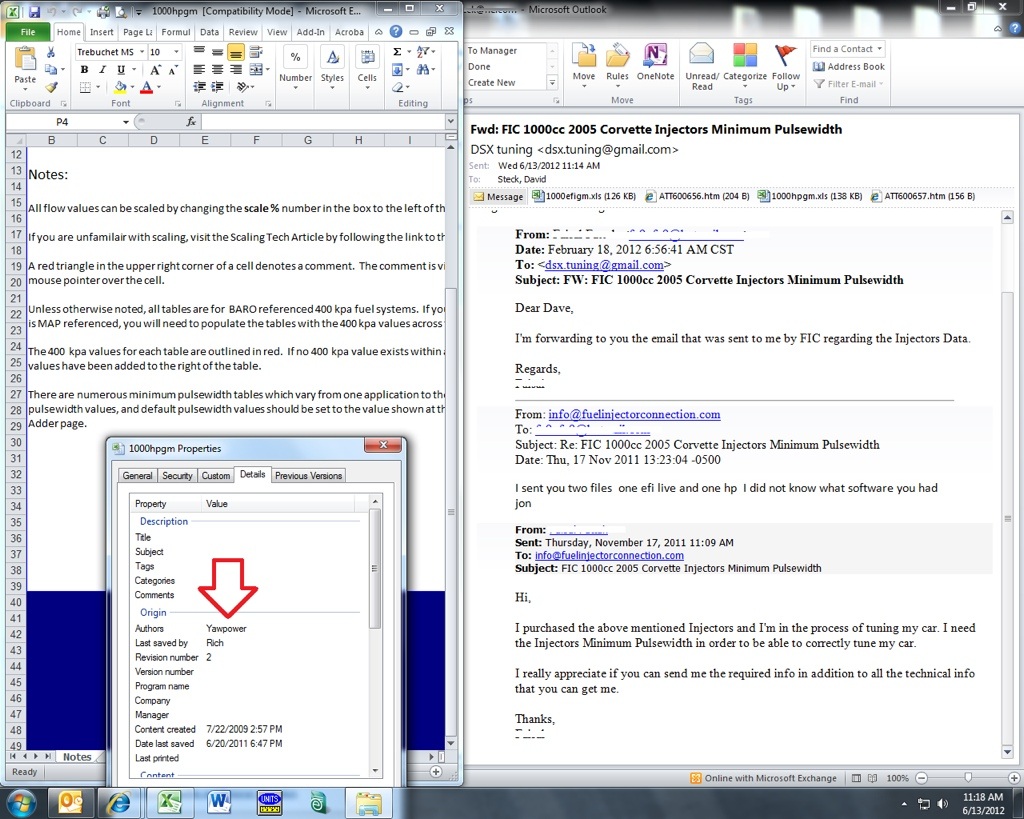 and finally including the link to the original document shown here 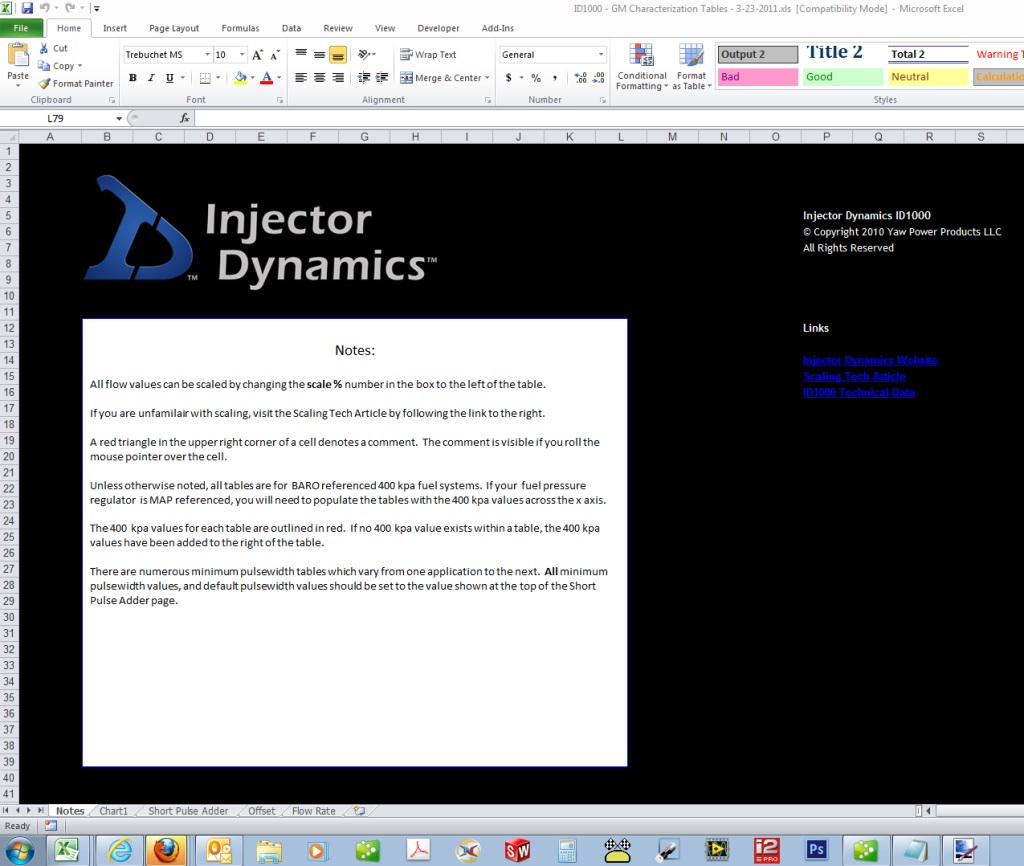 The originator of the LS1 thread fought back by asking what seemed like a valid question. He posted an Excel spreadsheet titled “FIC_1200cc_Injector_Data_HPT” and asked “curious then how FIC has data on injectors that ID doesn’t sell?”

That’s when I got interested, because this spreadsheet had quite a story to tell.

Turns out that the spreadsheet presented as proof of competence was a glaring example of deceit, and incompetence, to the point of being comical.

Except I wasn’t laughing. As I contemplated the data that had been presented, and the BS claims made about it, it occurred to me that I wasn’t the only one with a right to be angry. No one likes to be deceived, and anyone spending hard earned money for a set of injectors and accurate data would have good reason to be upset.

It also occurred to me that my only recourse was to expose the “data” for what it really was.

For those willing to immerse themselves in the technical details, read on, and I will detail this circus act for you.

The spreadsheet can be downloaded here, FIC_1200cc_Injector_Data_HPT.xlsx or directly from the HP Tuners forum thread if it has not been deleted. HP Tuners thread 37209

I have made several calculations within the spreadsheet to arrive at the conclusions that follow, and that modified version of the spreadsheet can be downloaded here: FIC_1200cc_Injector_Data_HPT Modified by Injector Dynamics.xls

This will allow you to check my math if you are so inclined.

So let’s get on with an analysis of this data, presented as proof of “The Same as Injector Dynamics but Cheaper”

As you can see, the data is in 4 different formats to cover various year/model/engine combinations.

When you make a living generating and interpreting data, you quickly develop an eye for patterns, and when something is not right, it tends to jump out. What jumps out here is the flow vs pressure table in rows 28 and 29. A quick calculation shows that the data does not follow Bernoulli’s Principle.

Not familiar with Bernoulli’s Principle?

Bernoulli is the guy who discovered that for the flow of an incompressible fluid through an orifice to double, the pressure must quadruple. Put another way, the change in flow is proportional to the square root of the pressure ratio. I think it’s safe to say that all of us who play with fuel injectors get this, and in fact a quick Google search will bring up numerous injector flow rate calculators that are based on this exact principle.

Using the flow at 128 kPa as a reference, we can use Bernoulli’s Principle to predict the flow at 568 kPa. Doing so, we find that the flow listed at 568kpa is only 60% of the predicted value, and a quick glance at the table shows that the flow barely rises as the pressure increases.

So how did they get this wrong? A typo maybe?

As they say, a picture is worth a thousand words, and that is particularly true when interpreting numerical data. To graph the data, I converted the tables to common units, and divided out the scale factor used to account for the 8 g/sec and 16 g/sec limits in the GM processor.

Having done that, all four data sets should lie exactly on top of each other, as they are all representing the same injector, the only difference being the fuel pressure range.

So what do we get when we graph this data?

Is this four different injectors?

Are we to believe that this injector has entirely different characteristics depending on what hood it is under? And that under one of those hoods, it doesn’t follow Bernoulli’s principle?

This is odd, considering that it is the easiest part of the data to get right, and anyone with an ASNU, or New Age flow bench should be able to generate an accurate flow vs pressure curve.

This would be funny if not for the fact that the well-meaning tuners mentioned above expect this to be accurate. After all, the data has been presented as a major selling point, and someone shelled out cash for this.

Offset VS Volts VS VAC

So now we move on to the part that requires skill, knowledge, and proper equipment to generate, the offset table.

So what jumps out here? A few things, but before I bothered to crunch any numbers, I graphed the data to make it easier to spot trends.

What immediately jumps out of this graph is the smoothness and shape that looks suspiciously like the curve fitted data generated here at Injector Dynamics.

A quick comparison to the online data sheet for the ID1000 shows that the values are indeed different, but that doesn’t explain the eerily similar shape.

Are we supposed to believe that someone generated this data for an entirely different injector, and came up with 561 data points that just happened to be different by a single factor with 5 significant digit accuracy?

I’m good at statistics, but I can’t begin to put a number on those odds.

I can only say that I have a better chance of banging Kate Beckinsale and her twin sister in the back of the presidential limo while Michelle Obama drives us to church. It just ain’t happening.

And the rest of the tables? Just as bad but with an added surprise, like a box of cracker jacks.

The offset tables labeled LS7/3 GEN V Camaro/Corvette, and E40 C6/GTO are the result of multiplying the Injector Dynamics data by exactly .82.

The surprise comes from the offset table labeled “LS1B” seen in graphical form below.

“We Have Data Too”

It’s clear that this data was “generated” by copying and pasting existing data, either from Injector Dynamics, or a factory tune, and then applying a multiplier that masks its true identity.

Worthy of the label “The Same as Injector Dynamics but Cheaper.” Hardly.

It is hard to believe that anyone would pull such a ridiculous, transparent stunt – but here it is, out in the open for anyone to see. You can even download the file and confirm it yourself.

Since word of this got out a few months ago, I have received numerous data sheets with similar “anomalies.” In all cases the data is either exactly the same as the Injector Dynamics data posted online, or a factored version of it, or a stock offset table. I suspect there is a lot more out there that I don’t know about. Not to mention the numerous tuners and end-users who thought they were getting accurate data, but got this instead.

Have you received bogus data for a set of low cost injectors? Maybe you should ask some questions of the vendor you bought them from.