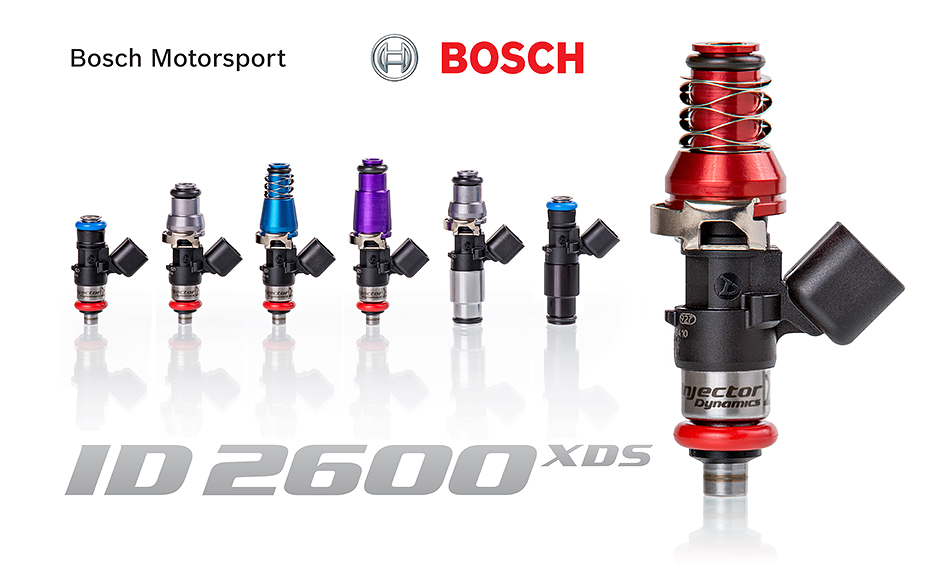 The ID2600-XDS is the most recent offering from the partnership of Injector Dynamics and Bosch Motorsport.

The ID2600-XDS was developed specifically for use with liquid fuels, featuring corrosion resistant internals, and long term compatibility with ethanol and methanol.

The ID2600-XDS has the highest flow rate of any injector offered by Bosch, and flows 50% more than the ID1700x.

The ID2600-XDS benefits from Dual Slope Matching, a method of matching the flow rate in both the linear, and nonlinear operating range, providing better cylinder to cylinder consistency at low pulse widths.

What is Dual Slope Matching?

Dual Slope Matching is a method of matching injectors that provides the best possible cylinder to cylinder fueling across the entire operating range.

Traditionally, injectors were matched based on static flow rate alone, which resulted in large deviations at low pulse widths.

Injector Dynamics introduced Slope Intercept Matching over a decade ago, which provided even cylinder to cylinder fueling across the linear operating range of the injector.

With the progression of turbo technology, and increased use of alcohol fuels, greater demands are placed on fuel injectors, and they are often required to deliver fuel well outside of their linear operating range.

How Does Dual Slope Matching Work?

Let’s first consider static flow matching which was the industry standard prior to Injector Dynamics.

The slope of both lines is the same, as they have the same flow rate, but the difference in offset results in the injector with the higher offset delivering 2.5 uL less fuel per injection event. At a pulse width of 19msec, which equals 90% duty cycle at 6,000 rpm, 2.5ul amounts to a mere 0.6% difference in flow between the two injectors, but at 2msec, that same 2.5ul difference amounts to a 9.5% difference!

Slope Intercept matching as introduced by Injector Dynamics in 2007 solved this problem by matching injectors based on flow rate (Slope) and offset (Intercept) providing even cylinder to cylinder fueling across the linear operating range.

As the graph clearly shows, the difference between the two injectors increases as pulse width decreases.

Shown as percent difference in flow, we see that even though the injectors are matched perfectly in the linear operating range, the difference in slope in the non linear range results in a flow mismatch that is magnified as the pulse-width decreases, becoming substantial at the very lowest pulse widths.

How Well Does This Work in Practice?

Moving from hypothetical injectors to a real world application, the response in the non linear range is considerably less orderly than shown in the graphs above, and is quantified using a technique called Least Squares Linear Regression – Which is a fancy way of saying straight line approximation.

By approximating the response in the non linear range, and matching sets accordingly, the best possible cylinder to cylinder fueling is realized across the entire operating range.

Using the ID2600-XDS as an example, the traditional Slope Intercept method of matching results in an average deviation of +/-5.1% in the non linear range, while the new method of Dual Slope Matching has reduced this to +/-1.4%

In a perfect world, this deviation would not exist at all, but for those of us who live (And tune!) in the real world, Dual Slope Matching represents a large step forward, and we are proud to offer it to the market.

All applications with an asterisk after the part number are incompatible with the stock ECU due to scaling limits.

Most applications fall into one of four standard fitments consisting of two standard lengths, (48mm or 60mm) and 2 standard fuel rail bores (11mm, or 14mm) The 3D models pictured below give the relevant dimensions of these standard fitments. 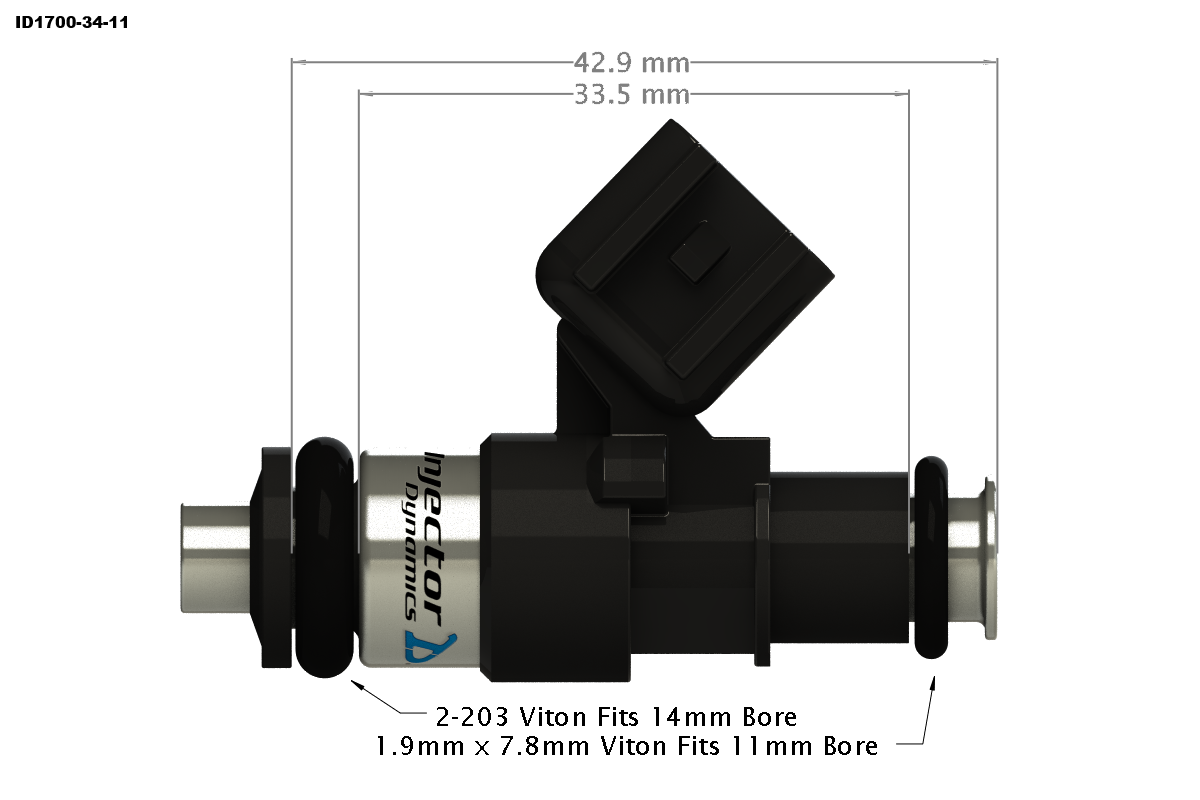 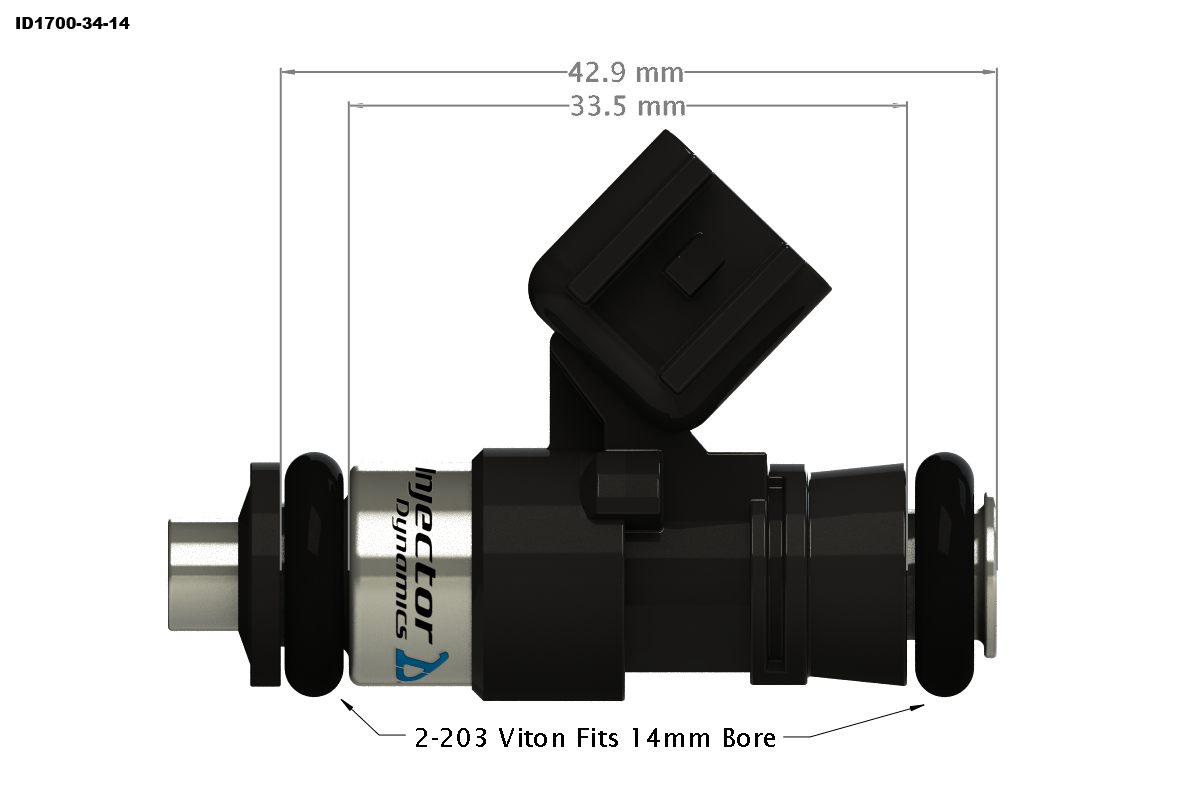 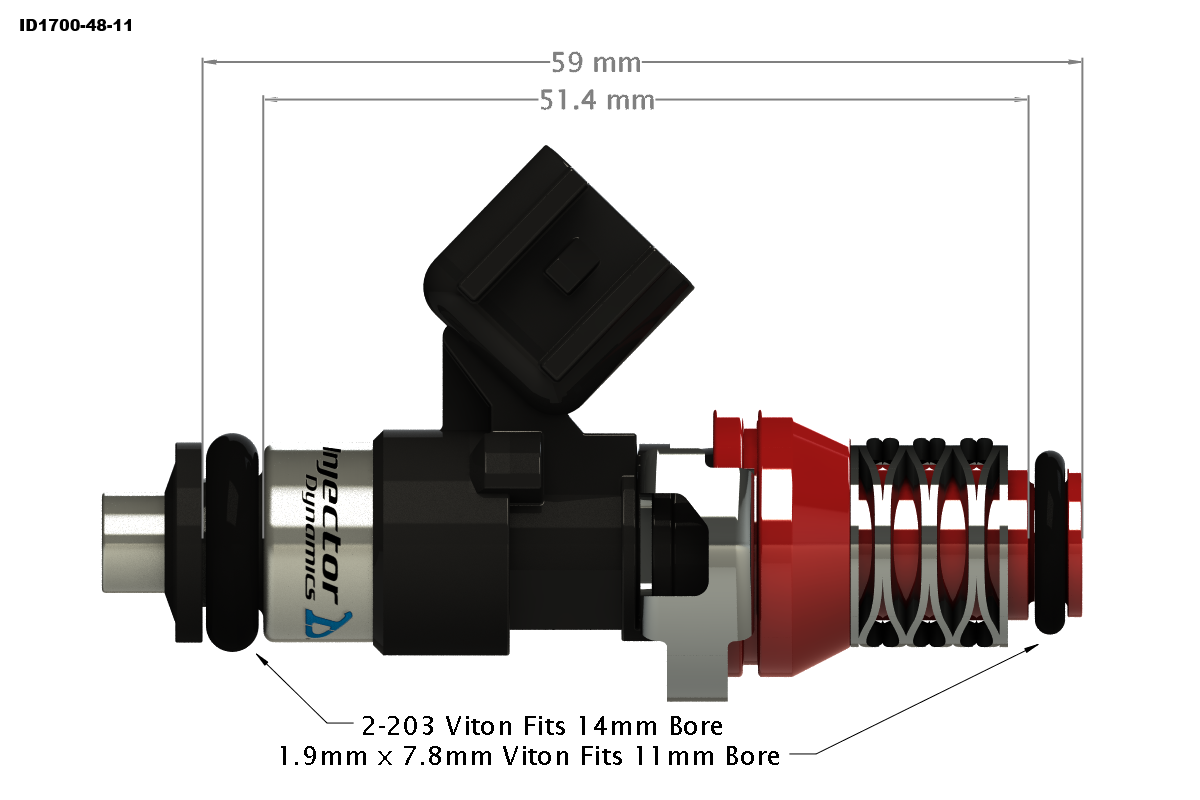 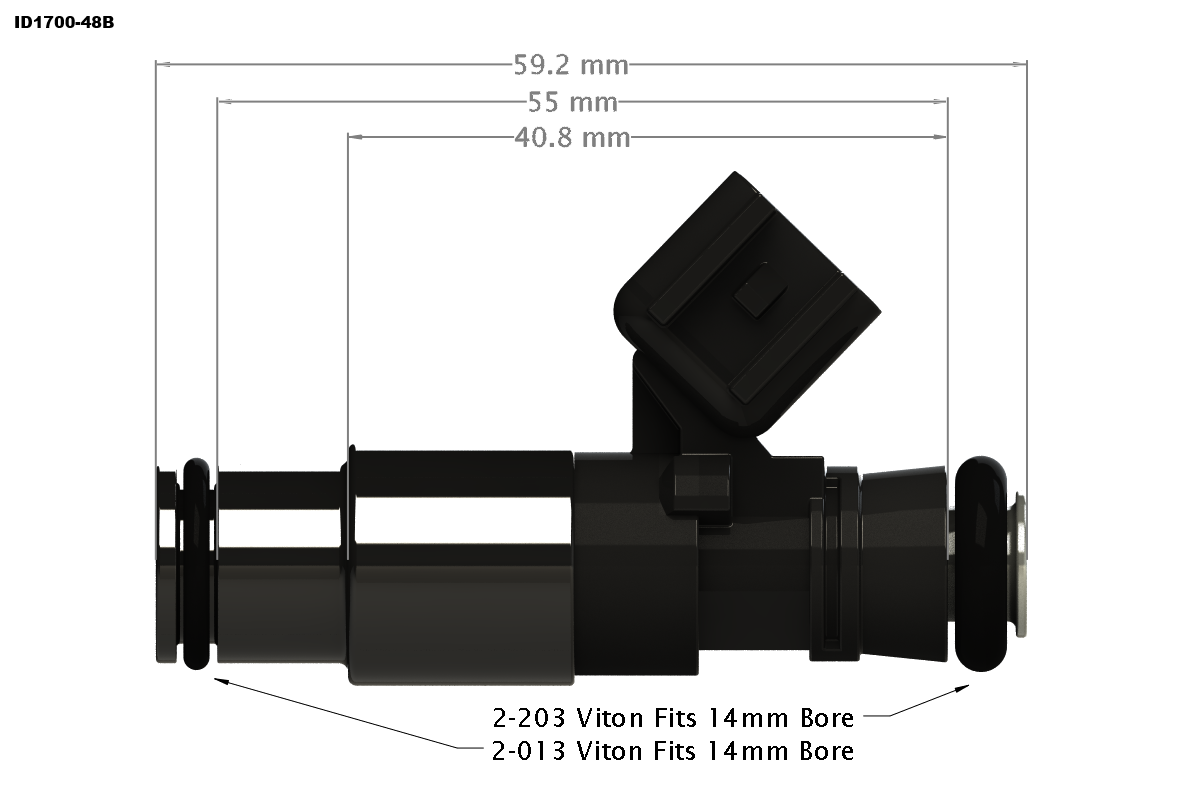 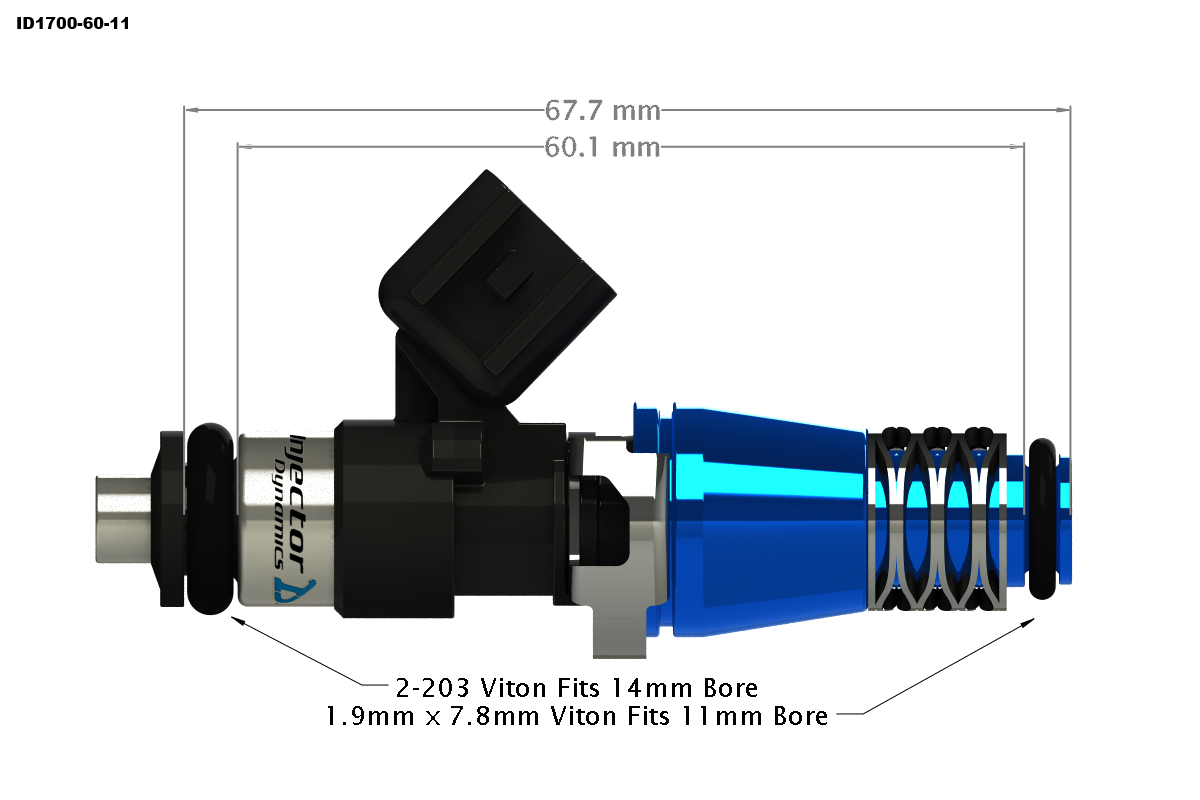 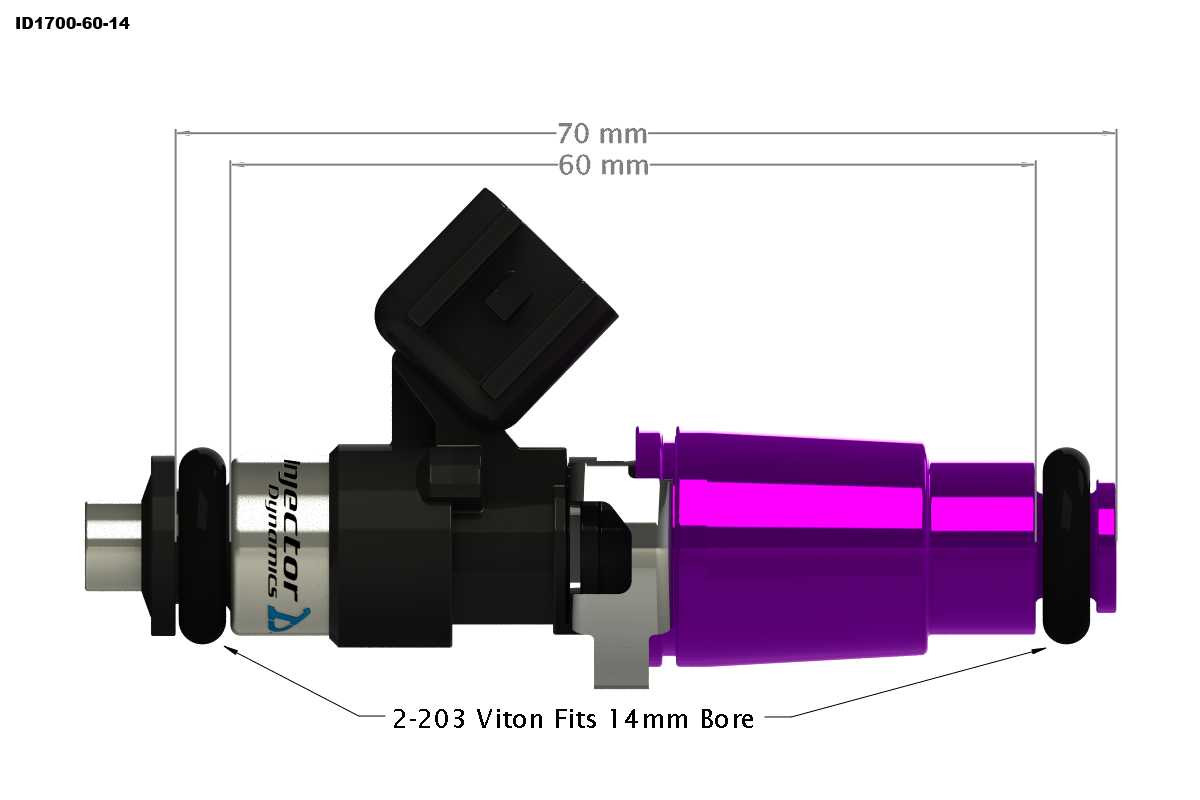 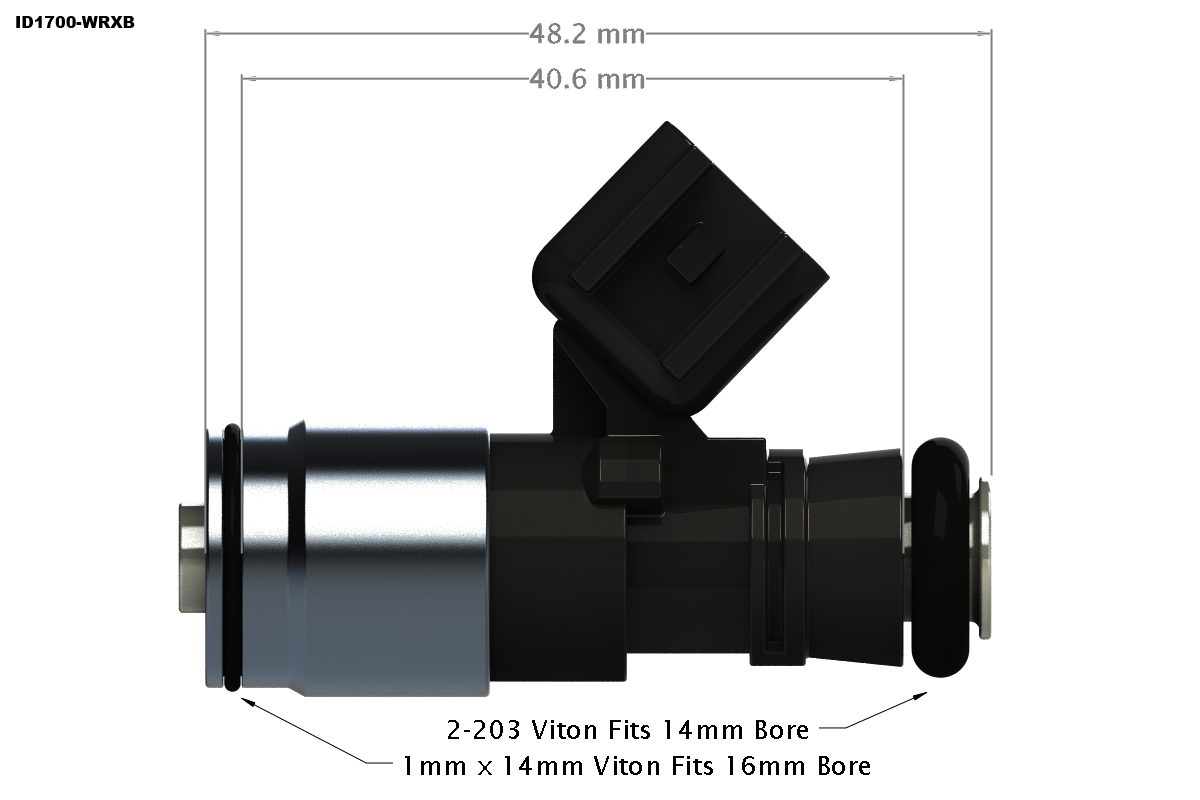 Are you tired of pouring over logs, making corresponding changes to your tune, only to find that what worked one day is off by the next? Have you wasted hours sifting through a myriad of injector related posts on the forums, only to find that there is no simple solution? Such is the nature of tuning with inaccurate injector data.

Accurate injector characterizations are the basis of all fueling calculations, so it’s no wonder that if you’re tuning without it, you will spend a lot of valuable time making the best of a bad situation. Not only will it keep you busy searching for endless combinations of mostly incorrect answers, it will rob you of one of the most basic functions provided by the guys who spent millions of R&D dollars designing the engine management system for your car.

Whether you are a professional tuner, or an end user, you can spend countless hours getting it “mostly correct” or you can copy and paste accurate characterization tables and get on with the job of maximizing performance and drivability.

Injector Dynamics is the only motorsport injector supplier capable of generating these OEM quality injector characterizations, and our engineering services are available to generate data for new platforms and applications at no cost to our customers.

We welcome the opportunity to provide solutions where none previously existed, and it is this commitment to value and innovation that has earned us our position as the industry leader.

The data located HERE is in a constant state of improvement, so if you are a regular user, check back often for updates. If you have any issues downloading, or using the data, or would like to inquire about developing data for a new application, feel free to contact us directly.