We all love E85. It’s cheap, it cools our intake charge, it reduces combustion and exhaust gas temeratures, and it does a fine job of resisting detonation.

The internet is full of articles describing its finer qualities, and if you believe everything you read, you might think that it is pure magic.

While alcohol offers many advantages when used as a racing fuel, it is not a magic cure-all elixir, and there are a few things you should know before going on a binge.

The first and most important thing you need to know about alcohol is that it is hygroscopic. Hygroscopic means that it will readily absorb moisture from its surroundings. In our case, the “surroundings” would be the atmosphere, and that atmosphere contains water. The higher the humidity, the greater the amount of water, and the greater the rate of water absorption by the alcohol.

The picture below shows a typical valve from a modern ball and seat style injector. The ball shaped portion of the valve that makes contact with the seat is made from super secret alloy known only to the injector gods, but the armature is made from a fairly traditional high iron content alloy which will rust in a heartbeat if it is exposed to water. 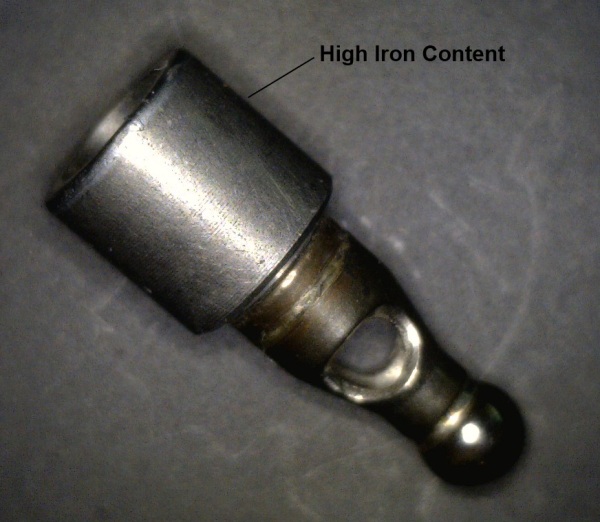 Care to guess what happens when the alcohol in your fuel system is contaminated with water?

The armature rusts, and sticks the assembly shut. At least that’s what has happened to the injectors that get sent back to us when the car doesn’t start after sitting for a month. Worse are the cases where the injector is left on the engine because it continues to function, but the valve lift is reduced by the layer of rust on the mating end of the armature.

And now that you know a cool new word, you can use it to bitch slap unsuspecting goofs on the internet.

“Listen dumb ass, if you don’t know what hygroscopicity means, you have no business tuning cars”

Or…“Anyone who thinks they can ignore the hygroscopic nature of alcohol, and treat it like any other hydrocarbon based fuel is in for a big surprise”

With intelligent witty posts like that, no one will ever guess that you are a forty year old virgin living in your mom’s basement.

The whole point of running E85 is to take advantage of the superior properties of ethanol, right? And E85 means 85% ethanol, 15% gasoline right?

Referring to “ASTM D5798-11 Standard Specification for Ethanol Fuel Blends for Flexible-Fuel Automotive Spark-Ignition Engines” we see that the 85 in E85 signifies a maximum ethanol content of 85% with the remainder being “unleaded gasoline, gasoline blendstocks for oxygenate blending (BOB), natural gasoline, or other hydrocarbons in the gasoline boiling range.”

The 85 percent doesn’t refer to pure ethanol, but to denatured fuel ethanol which already contains 2% hydrocarbons to make it “unsuitable for beverage use under a forumla approved by a regulatory agency to prevent the imposition of beverage alcohol tax.”

The real meaning of that bit of lawyer-speak horseshit is that E85 has a maximum ethanol content of 83%.

And that defines our maximum – so what about our minimum?

Are you sitting down?

So now that you know the what, you’re probably interested in the why. At least I hope you are. You didn’t come here with a blank stare and drool running down your face expecting to see how many people “liked” E85 did you?

The standard measure of volatility (a measure of a fuels ability to be readily vaporised) is Reid Vapor Pressure, typically stated in units of pounds per square inch (psi). A higher numerical value indicates higher volatility.

The class requirements change throughout the year as the average temperature changes. Areas like the North Coast of California, which have mild seasonal changes, switch back and forth between Class 1 and Class 2 as the seasons change. Other regions with more extreme seasonal temperature changes cover the entire range from Class 4 in the winter, to Class 1 in the summer, with classes 2 and 3 used in between. As a point of interest, Hawaii is unique in being the only state with the same volatility spec all year round. (Class 1)

So what does that mean to you, the end-users and tuners?

It means that the ethanol content will vary dramatically with season, as will the “hydrocarbons in the gasoline boiling range” used to meet the volatility requirement. In practical terms, it means that you may not get the same tank of fuel twice.

To be more specific, let’s consider how this variation in ethanol content affects the two critical parameters of the fuel (Stoichiometric Air Fuel Ratio and Octane Rating) using the extremes of 83% ethanol, and 51% ethanol.

I did say specific, so let’s include the density of the two fuels to make our numbers more accurate. Performing the same calculation, but accounting for ethanols high specific gravity of .79, and using a value of .72 for gasoline, we get a summer mix lambda of 1.006. Not quite as extreme, but still off in left field, and likely to rattle itself to death, or turn a piston into swiss cheese.

Fortunately the summer mix will have better detonation resistance, and better cylinder cooling due to its higher ethanol content, but if the tune was anywhere near optimized before, it sure isn’t now.

2. Octane – There are two considerations here. The first and most obvious is that as the ethanol content is decreased, the octane rating, or detonation resistance of the fuel, will also be decreased. The second, and not so obvious, is based on the ridiculously vague definition of what hydrocarbons may be used to “tune” the volatility of the blend. Note that this definition is not at all specific about which hydrocarbons should be used, and makes no mention of the octane rating of those hydrocarbons.

In case you forgot I will post it here again;

Since the overall octane rating or detonation resistance of the blend is dependent on all the components that make up the fuel, we have no way to estimate the octane rating of the final blendeven if the ethanol content remains constant.

In the real world, the broad flammability range, excellent cylinder cooling, and outstanding detonation resistance of ethanol make these issues less problematic than the numbers might suggest. But that doesn’t change the fact that injectors get stuck, and engines blow up because of the facts stated above.

How to deal with it? As with most things, knowledge is power. Just knowing that your opponent has a big left hook is half the solution.

1. Do not let your E85 or methanol-powered car sit for extended periods of time. In hot humid weather, the alcohol can absorb enough water to rust injectors in less than a week. If the car is going to sit, “pickle” the fuel system by emptying the tank and flushing the system by running the engine on gasoline for a few minutes.

2. Monitor the ethanol content of your fuel. This can be done one of two ways. Either install a fuel composition sensor, or measure it directly using the “baby bottle method” which is detailed at the end of this article.

3. Tune conservatively. Knowing that the octane value of the fuel can change even if the ethanol content remains constant, you will be wise to leave a few hp on the table by keeping that final 2 degrees of advance to yourself.

4. Eliminate the consistency issues altogether by purchasing “racing” E85 by the drum. Not exactly practical for the average street car, but if you’re racing I wouldn’t even consider running E85 from the pump. In addition to having a consistent ethanol content, E85 from a race fuel blender should insure that the “other hydrocarbons in the gasoline boiling range” used to make up the remaining 15% are of high quality with a reasonable octane rating.

Better yet, buy E98. The car may be a bit hard to start on a cold morning, but it is a race car right?

5. Don’t be stupid. This should cover anything I forgot. 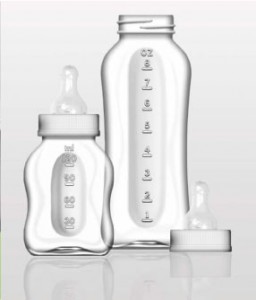 When I was a kid, baby bottles looked like this. They were made of glass, with graduations on the side. Now they’re made of plastic and have pictures of unicorns and retarded dinosaurs. Point is, they could be used to determine the alcohol content of fuel.

Water mixes with ethanol. Water does not mix with gasoline. E85, and all oxygenated gasoline is blended with co-solvents so that the gasoline does not separate from the alcohol if it absorbs a bit of moisture. If you add enough water these co-solvents can’t keep up, and the water saturated alcohol separates from the fuel.

Figure it out yet?

Alright, let me spell it out.

Get yourself a graduated cylinder, and put a measured amount of fuel in it. Let’s say 100cc’s. Then add a substantial amount of water. Let’s say 30cc’s. Now, cover the container and shake the shit out of it.

Let it settle for a few minutes and watch in amazement as the water saturated alcohol settles to the bottom and the gasoline floats to the top, leaving a clear distinct line between the two.

First, make sure you still have 130cc’s of fluid, than do some basic math. In this case, if we have 110cc’s of water saturated fluid at the bottom of the cylinder, we can calculate the total alcohol content. We added 30cc’s of water, so the remaining 80cc’s must be alcohol. And 80cc’s out of 100 is 80%. Voila!

Remember the co-solvents mentioned above? The ones that let small amounts of wet ethanol and gasoline stay in solution?

Well…it seems that there have been some changes in their effectiveness, because the last time I tried the baby bottle method of determining ethanol content, it took overnight for complete separation to occur.

At the time of this writing, I do not have a convenient solution to offer.
If anything changes, I will let you know.